I come from a line of Composer-Insulters, starting with my father, Herb, who harbored his own, thwarted composing ambitions. He grew up in an era when you sat around the piano after dinner singing, and he played a fair version of popular piano, which in those days -the 20’s and 30’s- meant songs from Broadway.  In prep school (Exeter) he even wrote a melody that became the minor standard I’m Yours when Johnny Green stole it. One afternoon, at a cocktail party given by his parents, Herb was seated near Jerome Kern, the man who wrote Showboat, who was demonstrating a few of his tunes at the keyboard. Herb, possessed by God-Knows-What competitive impulse, said to this icon of show-music, “Doesn’t Russell Bennet do a lot of your harmonies?” Bennett was Kern’s orchestrator. Kern didn’t respond, simply left the piano. 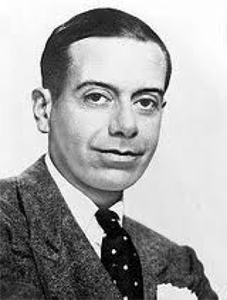 Pop would tell me this story, years later, and it must have had a profound effect because I repeated his behavior with Cole Porter. I’d been to see a Porter show, Silk Stockings (1954), at a matinee, and afterwards was leaving the theater with my pal Bobby Rosenblum, when, approaching Shubert alley, I saw Cole Porter, walking with a cane, shuffling his painful way towards the stage door. Jesus, Cole Porter! One of my idols. Since I’d discovered Rodgers & Hart at the age of thirteen, I’d been entranced by the world of show music -and Porter, of course, was probably the avatar of this universe. On an impulse, I approached the composer. “Mr. Porter,” I started. “I really enjoyed the show–” He actually placed his arm about my shoulder, perhaps to steady himself. “I’m happy you did, I worked very hard to make the songs appealing.” I adjusted my step to his, and then, dealing myself a hideously embarrassing memory for the rest of my life, I said to him, “But Mr. Porter…I wonder if you ever heard a Noel Coward song called Josephine.” In the show, Gretchen Wyler had sung a number about the Creole temptress who’d become Napoleon’s consort. It had closely approached the Coward number, in attitude and even some rhymes (‘chic’ and ‘Martinique’, for example). ” Porter stopped and looked at me. His face was impassive, a blank. “No,” he told me, “I never heard that song.” He smiled, almost paternally. He must have recognized that I was a misguided, brash kid simply trying to be provocative. “But Mister Coward and I,” he finished, “are very great friends.” With that, he vanished into the stage door.