Mulligan gestured toward Treva’s piano: “Who plays?” he asked. “Treva and I both play,” I replied, going to the keyboard; “And we both write songs.” I waited for him to say, Okay, let’s hear one, but he didn’t. I didn’t want to seem presumptuous and launch into an original without being asked, so I picked out a phrase from an Arlen tune, As Long As I Live. “Oh yeah,” he said, as he recognized the song. He rose. “Lemme go get the ax.” he said. Inside myself, I experienced a huge grin of anticipation -he meant his instrument! Wow. A moment later, he was back, carrying a huge, golden Sohmer saxophone -a baritone.  “You know Devil and the Deep Blue Sea?” he inquired. I nodded. “What key?” “Can you do A Flat?” Hmm. I pondered it. I wasn’t that comfortable in A Flat, but I didn’t want to say so and appear unprofessional. “Okay.”  He began popping his fingers in a medium tempo. “About here,” he said. I played a four-bar introduction, and he began sending big, breathy phrases into the room, filling the space with what felt like huge marshmallow logs of sound. Treva came out of the kitchen with a smile of astonished joy. We exchanged a conspiratorial look: we had one of the jazz greats in our living room, performing. Treva put her fist to her mouth. “Oh my god,” she murmured.

Finishing the A Flat chorus, I moved through a Cm7 to an F7, taking the tune to B Flat, an easier key for me. Mulligan slipped into it with an easy swing. Sandy was choosing to remain in the bedroom, monitoring the cat’s delivery; hearing Gerry play was obviously old hat to her. Well, not to us, me and Treva. We finished the rendition, and Gerry then asked me, “D’you know The Things We Did Last Summer?”  I was thrilled that I did happen to know this rare Juley Styne song, and, as we launched into the ballad, I tried to split my concentration between playing the right notes and trying to define precisely what it was that made Gerry’s playing so compelling. He had an ascetic precision mixed with a breathy sensuality… and the tension created by this…this dichotomy made you hang on his every utterance.

Added to this was a fine intelligence -you could tell he understood every word of the lyric, he was there for every emotional beat -even without any words. It was a complete delineation of the song. This I’d heard only once before with an instrumentalist -another wind player -Benny Goodman. On clarinet. A rehearsal for a Lincoln Center benefit concert -three-fifteen in the afternoon, I was in the wings, watching, and he picked up the stick and very gently, very off-the-cuff, blew softly into his mouthpiece the opening phrase of Rodgers & Hart’s Easy to Remember. YOUR SWEET EXPRESSION….THE SMILE YOU GAVE ME…THE WAY YOU LOOKED WHEN WE MET…there was a tender ruefulness, a soothing yet plaintive quality to his tone. And again, you could not turn your ear away. This was the kind of genius talent I was hearing now with Gerry. “You know,” he said, “I used to write songs with Judy.”

He meant Judy Holliday, the comedienne; they’d gone together for years. Gerry moved to the piano and sang and played. I wish I could remember the specifics. I recall the lyrics as being amusing and thoughtful, and the tunes as being musically proficient…but without much melodic interest. Sandy came out of the bedroom, looking relieved. “I think she’ll be all right.” she said. I wondered briefly whether Sandy had learned (in the Orient) the hidden secrets of how to cloud men’s minds. After the brilliant Judy Holliday, she seemed kind of a come-down for the hip, down-to-earth Gerry. Oh, well -maybe he needed someone to take care of his cat. 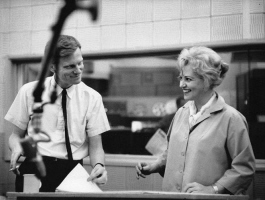