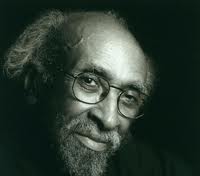 I couldn’t believe it -within a week, in this tacky gay bar, both Geoffrey Holder and Luther Henderson -the renowned orchestrator- had come to hear me. I tumbled off the piano bench and ran to greet him. “Oh, Mr. Henderson, let me take your coat.” He was wearing a kind of Sherlock Holmes cape, rather weighty, because inside it was lined with fur. “How elegant,” I said, what is this, sable?” “Mink,” said Henderson. I brought the coat to the hooks that ran along the far wall and hung it up…as Mr. Henderson took a seat at the piano bar. “All right,” I announced, climbing back on the rickety bench, “howsabout some Fats Waller?”

I launched into Ain’t Misbehavin’ and I thought I saw a smile cross Henderson’s face. But he was very cool, playing it close to the vest, not giving anything away. There’d be no approbation ’till he saw what he was getting; he was waiting for me to prove myself. Okay, I said to myself, Go get him. I began a complicated Harold Arlen tune from St. Louis Woman -a tune Henderson had orchestrated for Anita Ellis on her album I Wonder What Became of Me? LIGHTS ARE BRIGHT PIANO’S MAKIN’ MUSIC ALL THE NIGHT

Henderson’s eyebrows went up; by the time I’d hit the bridge in the song, he was smiling. “D’you know This Time the Dream’s On Me?” he asked. Well, I did -it was another Arlen tune, one of his sweetest. I’d played it for Teddi King when we did a concert here. So I sang that one, then My Shining Hour -we seemed to be on an Arlen kick- and Henderson asked Joee, the waitress, for another shot -he was drinking Jack Daniels. He seemed to relax a little. I guess he hadn’t anticipated being so close to the other customers, all of whom were -in varying degrees of intensity- flamboyantly gay. And white. Except for Joee. “C’mon, Joee, let’s do our stuff.” I beckoned Joee to the tiny, raised platform that served as our stage, directly to my left. Joee mounted the step delicately, with feminine grace. Joee had the most restrained, quiet manner…and the room hushed as they prepared to listen. I’d worked up a Betty Hutton number with Joee, Frank Loesser’s Poppa Don’t Preach to Me –and Joee slipped into the characterization of a young girl on the loose in Paris.                                 I’M HERE IN PARIS, SINCE EARLY IN MAY MY GOWN GOT ALL WORN OUT/BUT I’M STILL OKAY Joee’s ladylike precision, with the fluttering lashes and the little moues, was priceless. I glanced at Luther; his head was down, shaking with amusement.

I could feel we’d caught his imagination, he was going with it, and the evening was turning out a success. Joee left the stand, and I continued with more Frank Loesser (My Time of Day, from Guys & Dolls, with it’s unusual progressions) and Never Will I Marry (from Greenwillow) and I got all the changes right and now Luther ws impressed, I could tell. About one-fifteen AM he slid from his stool -he’d been there since eleven- and squeezed my shoulder. “John,” he murmured, “what a fine time”. “I hope you enjoyed yourself,” I replied. “Better believe it.” he finished. I went to the wall of hooks to get his coat – and it wasn’t there. I searched the hooks, I burrowed beneath the doubled and tripled garments that had been stacked throughout the evening -there were about eighteen or twenty…but the coat was gone. “Mark,” I cried to the bartender, “did you see a cape hanging here?” I didn’t know what to say. Jesus, what a finish to the evening. With my foot dragging, I crossed the floor back to Luther, who stood by the jukebox, trying to ignore Grace Jones’ rendition of It’s Raining Men. “I hate this shit,” he said. “Luther,” I ventured, “I don’t know what to say…I can’t find your coat.” I saw his face harden; shit. All the goodwill and acceptance -the positive impression I’d striven so hard to engender- drained from his face. He came back with me to the rack, and together we made another search. Nothing. No coat. His lips were tight as he went to the door. “I’ll check with Mark tomorrow,” I said to him, “maybe it’ll turn up.” I didn’t really believe this…and neither did he. I followed him onto the street, conscious of the chill temperature. “Luther, listen, let me give you mine–” He climbed into a taxi, shaking his head. “Never mind.” was the last thing I heard him say. We never found the coat, and this has remained one of my most painful memories.