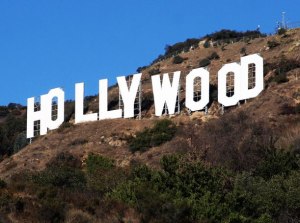 After the fancy stylists in Hollywood, It was a relief to come home to my regular barber, Eugene in New York. He had a comfy, unpretentious shop on Third Avenue in the twenties. “Hey, stranger,” he greeted me. “When’d you get back?” “Last week,” I said, as he drew the sheet over me. I was always struck by the care Gene took in arranging this sheet, almost as if he were setting the table for a banquet, smoothing it, snapping it neatly closed at the neck.  He made a point of treating his customers to his balletic repertoire of moves. I usually bypassed the shampoo, my custom being to soap my hair myself in the morning shower. I took off my glasses, and Gene misted me with moisture from the spray bottle. “Where were you again?” “Los Angeles. We were shooting a TV show. I brought you a coupla photos.” I’d come back from Hollywood with some fun shots, taken on the set at Universal. I always tried to bring Gene some provocative tidbit from my precarious freelance life.  What he enjoyed most was hearing about whatever movie names I’d encountered, the more famous the better. Gene cheerfully admitted he was a little star-struck: “Oh yeah, I read People Magazine, like everybody.” He was squinting at the picture.  “Who’s that?” he asked. “Looks like Al Capone.” 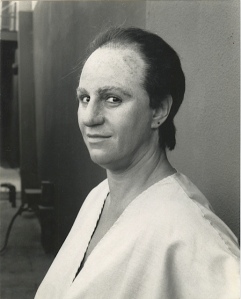 Y’ever watch The Amazing Stories? It’s a supernatural type show, like The Twilight Zone.”“Maybe. I think Danny might watch it.”  I could tell from his inflection that he’d never seen the series. “Well, in this show, George Gershwin comes back from the dead to deliver new tunes.”“So why is it Lainie Kazan?”      “She plays a psychic who channels his spirit. There’s a big thunderclap and suddenly she’s Gershwin.” There was a silence.  I felt the scissors snip-snip-snipping behind my head. “Who else did you meet?”  Gene wasn’t interested in the mechanics of plot; he wanted to hear about celebrities. “You know who Carrie Fisher is?” “She was in that George Lucas picture, right? Star Wars?”“Right. Princess Leia.”

“What’s she like, attractive?” “Oh yeah, and a great sense of humor. Probably the funniest woman out there. She writes, too.”Gene let this go by. I could tell he wasn’t particularly impressed by the people I’d brought him so far.  “Didja meet anybody like Julia Roberts? Or Brad Pitt?” “Nah. Sorry to disappoint you.” A feeling of irritation was growing in me. This barber on lower Third Avenue was telling me I’d come up short? My names weren’t glamorous enough for Gene, the celebrity connoisseur? Apparently not. Gene wanted A-List, twenty-mill a picture, red-carpet stars, not this pallid, nothing B-list I’d supplied. Where was Tom Cruise? Lindsay Lohan?  Where was Drew Barrymore? His implied dismissal of my talented friends annoyed me.  Not good enough? Look, I felt like saying, Carrie Fisher is the female lead in a fantasy classic.

I could sense my frustration leading me to a sudden, vengeful idea.“Listen, Gene: suppose Brad Pitt were to walk in here and sit down for a cut.” “Yeah…?”  “And suppose, when you finished, he said to you, ‘Hey, Man, I really like your work. How’d you like to come to South America with me for three months?  I’m shooting a picture in Rio, and I want you to do the hair. We start in May.’”

There was another silence behind me; snip-snippety-snip. And then Gene said: “Would that be for the women as well?”“No, no no, the women have their own guy; just the men. And he’d offer you twenty thousand a week.” Snip, snip. snippety-snip. Snip.  I could almost hear the ka-ching ringing in Gene’s mind as he did the figuring. Three months (twelve weeks) at twenty thousand per. Two hundred and forty thousand dollars. To Gene, that was probably three years earnings.  College tuition for Danny.  Roof repair on his house in Montclair.  The operation his mom’s been postponing.“But who would I get for here?” “Ah, Gene, you must know somebody.” Behind me, I heard a sudden intake of breath and then, excitedly: “Angelo could do it!” “Sure, Gene, what about Angelo!” I had no idea who Angelo was, but Hey, I thought, we’re really putting this together. I couldn’t believe how easily Gene had swallowed my bait. “Would it have to be May?”“Why, what’s the difference?” “Danny’s graduating high school in June. I need to be there.” But he was thinking about it, I could tell, trying in his mind to make it work out.  He didn’t speak for perhaps ninety seconds.  Then he said,“Look, I, I’d like to, but I dunno.”  I said nothing, wondering what was triggering his hesitation.  “What would I do with my guys, my customers? These people depend on me. I grew intense. “Gene, wouldn’t they understand? Wouldn’t they be glad for you? It’d only be for three months. Angelo could cover it.” “They depend on me.” he repeated. “To be here.” Snip. Snippetysnip. “You know, I have one guy, Leslie, he’s got a steel plate in his head from a piece of shrapnel he caught in Vietnam, and the surgery made this little cranial dip, right in the back. You have to be very careful when you cut around that. Use the razor.” Snip.  “I’m not sure Angelo could handle one of those.” Snippetysnip. Pause. “Yeah, Leslie.  He’s comin’ in Thursday.” My heart was beginning to sink. I had no idea Gene would take this adolescent prank of mine so seriously.  Cranial dip, my God.  But nothing could make me pull out now; my malicious genie was in full swing.

“Well, Gene,” I said, “maybe you should think about it –because it could be a great opportunity, with the publicity you’d bring back, wow: men’s hair on the new Brad Pitt flick—boy, you could probably parlay that into a new location, maybe uptown, Madison Avenue. You know: Stylist to the Stars—“                  I couldn’t resist, I half-turned to look at him. I saw him smile, sweet, but with a touch of sheepishness in it, almost an apology.  The smile carried a certain resignation, it revealed the corpse of an ambition I sensed had once burned within him…an ambition that might have taken him higher. He was good; if he’d gone with his impulse he might easily have become a high-priced stylist, like Vidal Sassoon or Fredric Fekkai. But the ambition had been smothered by the necessity of providing for a wife and when Danny came along he’d had to give up his mobility. He put the down payment on the house in Montclair, signed the mortgage papers and that was it. Now he was anchored, his life was sealed, immobilized. His choices had hemmed him in. It was too late to go from Country Mouse to City Mouse. Too late to play at the Big Table. “These peole depend on me,” he repeated. He undraped my sheet and shook it out with a gentle wave. He was looking a little sheepish. But he smiled. “You had me goin’ there, you really did.”  I got out of the chair.  I was suddenly ashamed of my childishness, forcing this tease of a mind-game on him. “Well, okay, Gene, then I’m afraid Mr. Pitt must with-draw the offer.”   He almost blushed. “It was nice while it lasted.” he said, and now his smile was the warm, friendly smile I always got from Gene. I had an overwhelming impulse to give him a hug. If it hadn’t felt like an apology.