Betty’s mother Addie died pushing Herbert’s wheelchair up the ramp of the Veteran’s Administration Medical Center in Tacoma, Washington. She simply keeled over. A man named Kormer grabbed the chair as it threatened to roll backward down the ramp. Herbert’s reaction was primal and childlike, as always: looking down at Addie’s thin, crumpled body, he sensed she was dead. “Who’s gonna do my laundry?” he whimpered. It was the same high-pitched, strangulated whimper his voice had become ever since he’d been gassed in the first World War. Mustard-gas. He’d been in that chair since 1936…with only half a mind, reduced to the level of a eleven-year -old.   Betty had to do something with him. He couldn’t manage by himself and there was no-one else. She sold the house and moved him into a new VA Hospital in Tarrytown, New York. She was on the East Coast now, trying to make it as a singer. “I’d like to go visit him,” she said to me one hot, broiling Saturday in July. “Just take him down by the riverbank, let him look at the Hudson. Could we?” That was the summer I had a brand-new Pontiac convertible –I’d won it on a quiz show.  So I took Betty up the Henry Hudson Parkway and waited in the VA parking lot until Betty came down with her father. It fell to me to lift the frail, eighty-nine year old Herbert from his chair into the passenger seat. I remember thinking, God, he’s just a bag of bones. He had a stainless-steel canister which he needed to press to his groin. They’d given it to him because he was incontinent, couldn’t control his urine. I remember thinking, Don’t piss on the seat, you old bastard. We set off, and I drove slowly so we wouldn’t jar that canister loose. Slowly, slowly, foot on the brake, inching down the hill to the river, the blazing sun nearly roasting us. 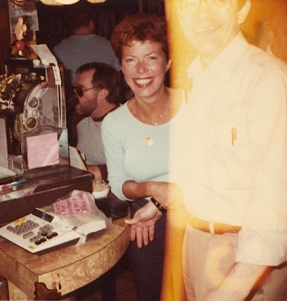 “They making you comfortable there, Daddy?” Betty asked him from the back-seat. I glanced sideways at his drawn, sunken face to hear his response. He had a three-day growth of white stubble and I wondered who shaved him, or if he could do it himself. “They put me with this other fellah,” Herb said. “He’s always in the bathroom when I have to go.” Betty had learned how to deal with these querulous complaints: don’t try to address them, simply go on to the next question. “How’s the food?” she continued now.  “The what?” I found that whimper of his, produced without breath from the front of his throat, almost comic, like the voice of a cartoon character. It was nearly impossible for me not to break into laughter each time he spoke.  I wiped my forehead with the back of my hand. Jesus, it’s hot, I thought, must be in the nineties. I glanced surreptitiously at my watch. We’d been sitting there for over half an hour. “The food, Daddy,” Betty repeated, “when they give you dinner, what do you get? Soup? Meatloaf?”   In reply, Herbert made a sound of urgency: “Aanh.” “What is it, Daddy?” “Aaanh.” He pointed to his lap. He kept muttering Aanh. I saw his eyes begin to fill with tears –and then I sensed a wave of embarrassment emanating from him. He was jabbing his finger at his groin now, in a steady motion, Point, Point, Point -all the while crying Aanh, Aaanh. Something was painful, something he couldn’t -or wouldn’t- articulate. I put my hand on the canister, even as I realized the problem –Oww! The damn thing had heated in the sun, become too hot to touch, was even now searing the skin on Herbert’s groin! Christ, how bizarre! “Betty!” I cried, “get the Kleenex! In the glove compartment!” Herbert was squirming in agony. With a wad of Kleenex protecting my fingers from the sizzling can, I slapped it away from Herb’s lap. It bounced, leaking, to the floor. The harsh smell of urine wafted into my nostrils as, wrinkling my nose in distaste, I placed the Kleenex under his genitals. I put the car in gear, shaking my head in disbelief, and headed back up the hill, faster now. In the drive-way, a VA attendant lifted Herb back into his wheelchair. I pointed to the canister on the floor. “And take that with you,” I said, keeping my voice under control. I headed back towards the Parkway. We rode in silence for ten minutes and then Betty said: “You were planning to sell this car, weren’t you?” I gave Betty a twisted smile. “Mm hmm.” She started laughing. “I think my Dad may have depreciated it –by about ten thousand dollars.”

I’ll have more to tell about Betty in future posts. She was an amazing character.