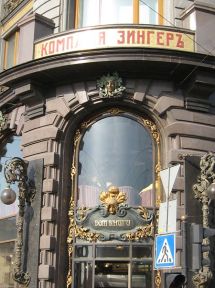 Yes, the Hermitage Museum is worth visiting -if simply for the one Rembrandt entitled “The Old Jew”. Rembrandt’s genius strikes you unexpectedly, shockingly, as you view the eyes and the mouth of this portrait. He manages to capture the soul of the man…an incredible achievement, the painting seems to breathe in front of you. Worth the entire visit, it’s a memory that sticks with me. Then there’s the Peterhof Palace, noteworthy for it’s dazzling fountains, which activate every morning at eleven, accompanied by an inflated, majestic John Williams-style score.

But it IS impressive, geysers of rainbow-hued water, spewing forth the glory of Peter the Great, everyone standing at the railing, awed, taking peekshas. If you go, book a private tour, otherwise you’ll wait hours on line. Our guide, Svetlana, was nimble as a minnow, gliding us guppy-like around the perimeter of the lines. We ate lunch at a cafe called The Idiot (after Dostoyevsky) -great Borscht. But for me, the most intriguing, dramatic hour of our tour was a visit to the house where Rasputin was assassinated, the Yusupov apartments.

This guy was the Elmer Gantry, the Aimee Semple MacPherson to the Czars, he had them in thrall -because he seemed to be able to arrest little Nikki’s hemophilia -through hypnotism! The officials surrounding the elder Nikolai and his Queen, Alexandra, fiercely resented his influence over the royal family -so they planned an assassination: they fed the holy man a poisoned dinner, but he didn’t die. They shot him, but he didn’t die, he crawled up a staircase into the courtyard, where they shot him again, tied him up and threw him in the Neva River. That did it, finally, and at the Yusupov they have a kind of Madame Tussaud reconstruction of the murderous evening, with wax figures holding pistols, etc. A provocative climax to our first day. Second day we visited the Cafe Singer, built by the sewing machine magnate. This is the most impressive bookstore in the world, with a three-story ceiling and books and DVD‘s in many languages. Amazingly, I found a paperback mystery by my favorite Noir author, Cornell Woolrich! It’s in English, with the American idioms translated into Russian as footnotes. An unbelievable discovery. NEXT WEEK: STOCKHOLM.