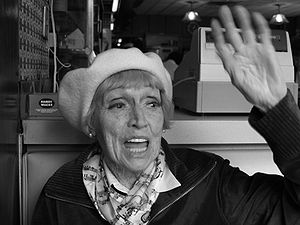 My friend -I’ll call him Don- wanted to impress an attractive young fellow just arrived from the mid-West, so he invited him to hear Anita O’Day, the renowned jazz singer, at a club way over on the West side below Fourteenth street. Anita was in the twilight of a rocky career, her ups and downs with heroin and alcohol had brought her -at age 78- to this nondescript little dive, and Don was chatting up the boy -let’s name him Bruce- and inquiring politely what had led him to leave Boise Idaho for the Big Apple. “Well, this is where they tell me the action is, the opportunity.” Kid couldn’t have been more than twenty-two years of age. “What is it you’d like to do?” Don inquired. “I’m an artist,” said the boy, “like to get maybe with an ad agency…” “Mm,” Don responded, “I might be able to help you with that.” He put a friendly arm around the boy’s shoulder. “With your looks, you’ve got a foot in the door before you even say hello.”     Bruce blushed significantly. “Now, just who is this we’re hearing tonight?” he inquired.

“She’s one of the greatest jazz singers you’re ever gonna hear,” Don told him. “Her sense of time, her rhythm is simply unbelievable. Wait’ll you hear her scat.” “What’s scat? Mouse droppings, maybe?” Don couldn’t believe Bruce’s naivete; but he would have to play this very very carefully, not scare the kid away. “You’ll see. Just sit tight. she’ll be on in a few minutes. She’s gonna come through that red curtain, there, you see?” Anita was due on at one AM (this was the last show on a Saturday), but at twelve-fifty, Don saw her cross the room from a side entrance, obviously where the dressing room was -probably nothing more than the ladies room here. The boys in the room shifted to make way for her. There was a decent side crowd, maybe ninety people. Don was amazed to see her head right for them. She pushed her way through guys at the bar and settled herself directly in front of Bruce. Ignoring everyone else, she pulled the boy’s shirt front up close to her face. In a cool whisper, Don overheard her say: “I’ve been waiting for someone who looks like you all evening, brother. Now if you’ll just wait till I do about fifteen, eighteen numbers for these assholes in here, I’ll take you home with me -I’ll take out my teeth- and I’ll give you the greatest blow-job you’ll ever have.” With that, she pushed her way back through the crowd, and a minute later, the voice came through the loudspeaker. “Ladies and gentlemen, the West Street Room is proud to present -Miss Anita O’Day!” The curtain parted and Anita came out, just a piano behind her: NO-ONE MADE/HAS GOT A SHADE ON SWEET GEORGIA BROWN/TWO LEFT FEET/BUT OH SO SWEET IS–               Don looked at Bruce, the kid was red with embarrassment. “I-I-I’m sorry,” he said to Don, “I…I have to leave. Thank you for…for…” he stumbled out, leaving Don with the check -and a giant hard-on.  When he told me the story, out of everything Anita said, the line that stuck with him was, ‘I’ll take out my teeth’.

1 thought on “Anita O’Day and the Farm-boy”